Covert is a Columbia native who graduated from Spring Valley High School in 1990.  He then graduated from Piedmont Technical College in 1993 with a degree in Criminal Justice, and served as a South Carolina Highway Patrol Trooper from 1994 to 2001.  In 2001 he made the move from police work to homebuilding when he founded Covert Homes. He and his family are members of  Shandon Baptist Church. John and his wife, Tami, have three children, Bailey, Bryson, and Meredith.

John joined the BIA in 2005 and rose to BIA President in 2014 and currently serves on the Building Industry Charitable Foundation Board of Trustees. He received the Richard N. Sendler Award from the association in 2016. This year, he led the association’s efforts to build six pavilions at Centennial Park at Ft. Jackson.

The 2019 BIA Associate Member of the Year is Sally Rymer-Hoard of Essex Homes, SE. Rymer-Hoard joined the BIA and Sales and Marketing Council (SMC) in 2004 and currently serves on the BIA Board of Directors as Chairwoman of the SMC. She embodies the spirit of the Association as a mentor for others in our industry even those she may compete against in business. She is a true professional in every way in a business that can be rough and tumble at times, never wavering in doing the right thing even though it may not be the easy way. The Associate Member of the Year Award is sponsored by Essex Homes.

Stan Beckley of BMC was named the Richard N. Sendler award winner. This award is sponsored by BMC and is voted on by past presidents and associate vice presidents of the BIA and the recipient must project a community image that adds stature to the association; exemplify standards promoted and supported by the association; institute innovative and creative ideas that have improved the housing industry and have unquestionable character and integrity.

Beckley has been a member of the BIA since 1995 and rose to the highest office an Associate member could hold, Associate Vice President. He was named Associate Member of the Year in 2002 and 2014, and became an Honorary Member in March 2019 after his retirement from BMC. One of his most lasting contributions to the association has been his service as chairman of the Construction Workforce Training Task Force which works to bring new talent into the building industry and help alleviate the problem of skilled labor shortages. He represents the association in an outstanding manner in the business community and devotes tireless service to the improvement of the association.

G-T-G Insulation was named Trade Contractor of the Year by vote of the Builder Members of the association. To be considered, the company must be an independent contractor that contracts with licensed general/residential contractors to do construction work, repairs, improvements or re-improvements which requires special skills and involves the use of specialized construction trades or crafts and exhibits the degree of professionalism sanctioned by the association..

The Building Industry Association of Central South Carolina would like to commend the award winners on their hard work and dedication throughout the year.  They have not only served the building industry well, but the Columbia community and the entire state have benefited from their dedication and work. 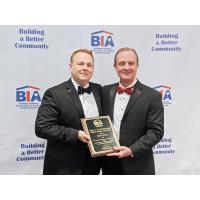