Home building has been an undisputed bright spot for the economy as the recovery continues. New home sales are outpacing construction. In fact, recent Census data indicate that August new home sales of homes that have not started construction are 69% higher than a year ago. The ongoing shift to lower-density markets, as well as historically low interest rates, are further supporting housing demand. Data from the Mortgage Bankers Association finds that for the week ending Oct. 2, applications for purchase mortgages were 21% higher than last year.

The duration of this hot housing market is dependent on a number of factors. Although low interest rates are expected to continue until at least 2023 because of forward guidance from the Federal Reserve, a mass deployed vaccine could reverse, in part, some of the geographic shifts in housing demand. And in the near term, the labor market will determine the endurance of both rental and for-sale housing demand.

Economic data regarding employment have shown slowing improvement. Initial jobless claims totals have leveled off in recent weeks, registering between 800,000 and 1 million new claims since the end of August. Although this is an improvement over the large scale of job losses in March and April, the ongoing elevated count is a concern. (Jobless claims were averaging 200,000 to 300,000 before the recession.) This is consistent with the September BLS report, which found that the unemployment rate declined from 8.4% to 7.9% — a move in the right direction, but at a slower pace of improvement.

However, residential construction gains continued. Builders and remodelers added 22,100 net jobs in September, and the open jobs rate in construction remained relatively high as of August. It is likely the home building sector will post a year-over-year gain in employment in the coming months as builders add workers to meet solid demand. 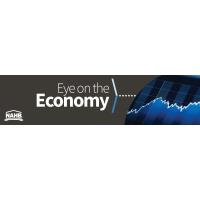